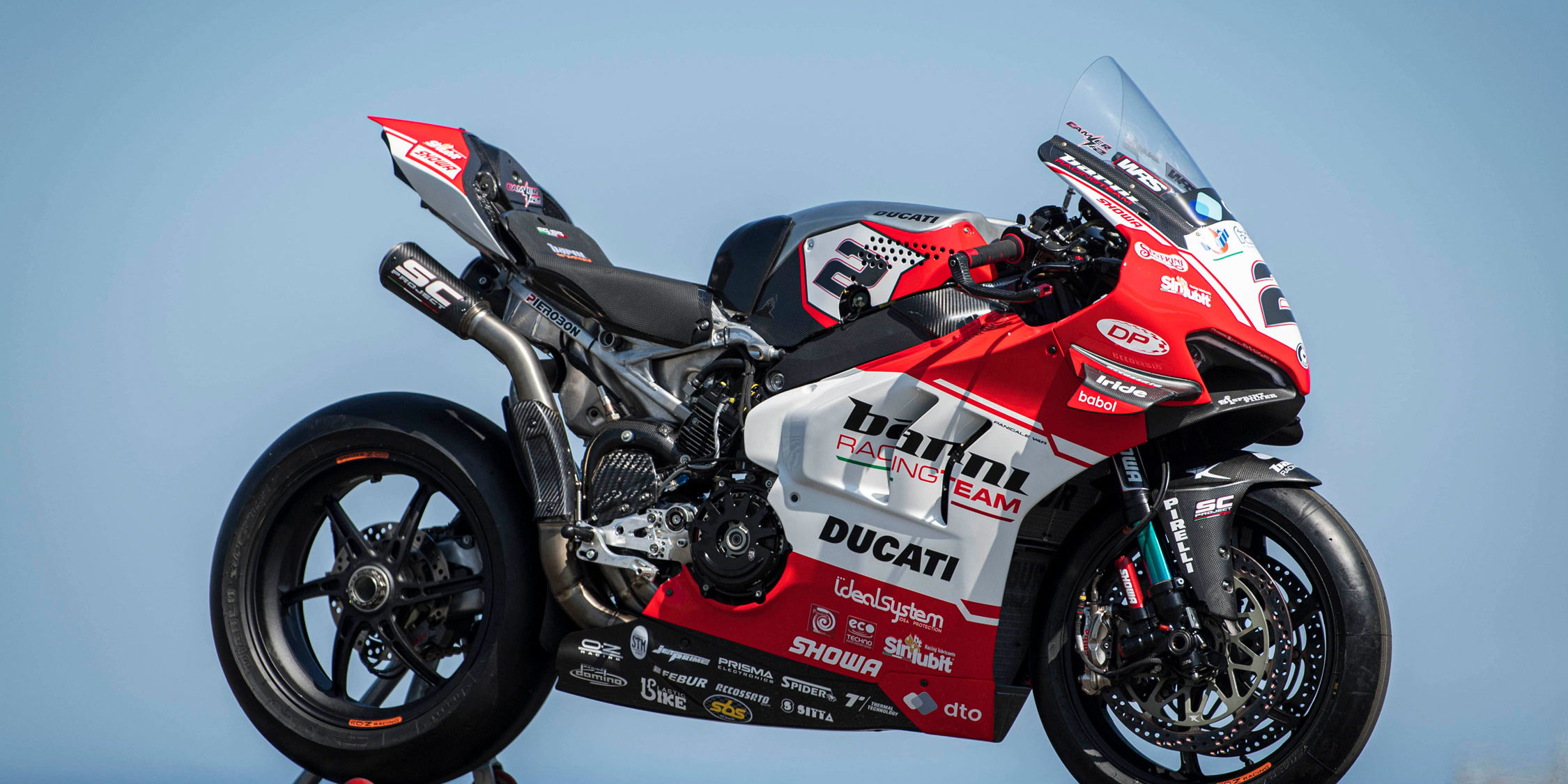 The exhaust system made specifically for the Ducati Panigale V4 R Superbike will also be available on the market.

Phillip Island (AUS), 26th February 2020. A very import season is around the corner for Barni Racing Team who will be at the starting block of the 2020 WorldSBK season with a new rider –  the Brit Leon Camier – but also  with a new exhaust system for the Ducati Panigale V4 R.
SC-Project, a leading company in making of racing exhaust systems, will be a Barni Racing Team’s official partner both in WorldSBK and in the Italian Championship. The Milanese company – headed by Stefano Lavazza and Marco De Rossi – will guarantee a dedicated technical support for the Marco Barnabò’s squad.
The exhaust system, specifically developed for the Superbike version of the Ducati Panigale V4 R, is derived from the SG1-GP kit available for Ducati Panigale V4’s production models and is the direct result of research, development and design work made  by the in-house R&D department, in partnership with the major teams of the MotoGP and SBK championship’s teams.
The new SC-Project SG1-GP titanium exhaust has already made its debut in the Jerez and Portimao tests, but SC-Project and Barni Racing Team unveiled in Australia the first evolution with a double „high“ solution, called „4-2-1-2“, which provides two silencers placed laterally under the tail. Both alternatives gave excellent signals during the two days of testing on the Phillip Island track, where next weekend the first round of the WorldSBK World Championship will take place.

SC Project – The Company
SC-Project, a Milanese company founded in 2006, is specialized in the design and production of high quality exhaust systems for racing motorcycles, several times World Champion in MotoGP and Moto2. The company, equipped with technologically advanced machinery that allows to maintain very high quality standards, is strongly specialized in the development of aftermarket exhaust systems. Thanks to the use of the best materials available on the market such as titanium, Inconel and carbon fiber SC-Project is able to produce complete systems and silencers at the highest level. SC-Project headquarter covers over 12,000 square meters where about 100 people are employed; the Technical Director of the company is Paolo Termignoni, hired by SC-Project since 4 years.

Marco Barnabò – Team Principal
«The agreement with SC Project represents an important step forward for our team. After Showa, another leading company in its sector has chosen the Barni Racing Team to develop one of its flagship products on the track. This represents a great certificate of esteem and gratifies us for the work done so far, but at the same time pushes us to raise the bar again. The only way we know to paid back that trust is to obtain important results in both CIV and Superbike championship».

Stefano Lavazza – Co-Owner SC-Project
«For SC-Project being able to collaborate with a historic, serious and important team like the Barni Racing Team make us proud and it represents a great step forward in the development of exhaust systems for Ducati motorcycles. For us it’s very important to work again with the Borgo Panigale brand; SC-Project was Technical Partner of the Ducati Pramac Racing MotoGP Team from 2009 to 2013 and being Technical Partner of Team Barni in the 2020 season is a new challenge. The Superbike Championship allow us to express the best of our development technology in racing. We will guarantee our maximum technical effort developing the best exhaust system close the technicians and riders of Team Barni. For sure they will be able to give us the best feedback on track».